On May 27th Chicago Auto Pros, a local premier automotive detailing shop, hosted their second annual open house. Hundreds of automobiles from a wide variety of manufacturers descended on the shop located in Glenview, IL. In addition to hosting the car show, Chicago Auto Pros also held an Indy 500 viewing party for all guests to enjoy.

“We wanted to have this event to make everyone aware of our shop and it’s a good time,” said Chicago Auto Pros co-founder Jason Otterness. “It’s a good time to get together and share their love and passion for cars.”

Despite severe temperatures inching towards a hundred degrees, attendance soared. In a move that is foreign to most car shows, Chicago Auto Pros provided various kegs of beer and plenty of water free of charge. Attendees could catch a break from the sun by walking indoors where the shop had a projector with a live stream of the Indianapolis 500. In addition to the beverages, Big Wang’s Chinese Street Food truck was on site ready to serve up hot and spicy delicacies to hungry car enthusiasts.

While the show served as a meeting point for hundreds of car fanatics, the event organizers expressed why the show is such a hit for them. “We put on this car show today to spread awareness of our shop and show people the types of cars we work on, and what kind of stuff we do with cars to make them shine and look brand new,” said Chicago Auto Pros social media director, Matthew Groner.

Every car from foreign to domestic, classic, and showroom fresh was represented. The whole global automotive spectrum was present with cars from the United States, Germany, Japan, and England in attendance. The sight and sounds of Porshces, McLarens, Ferraris, Lamborghinis and various muscle cars delighted all event attendees. “The acid green GT3 and all black Ferrari F12 were my favorite cars of the day,” said attendee Kyle Calcaterra, “It was the hottest day of the summer so far, but that didn’t deter anyone form bringing out some awesome cars. Having a food truck and drinks for everyone that came was a huge bonus”

The show was an opportunity to see a few cars in the metal that I had never seen before. Chuck Haling of Antioch brought his brand-new Dodge Demon, a straight line focused monster from the Fiat Chrysler corporation. The Demon is designed for one thing and one thing only, going very fast on a dragstrip. Dodge calls the Demon the highest horsepower and fastest quarter mile production car of all time. Based on the already ego crushingly fast Dodge Hellcat, the Demon gets more horsepower, up to 840 on race gas. “I’m having a great time at the Chicago Auto pros open house,” said Haling. “It is very hot, but this is a great event with some amazing cars and they even hosted an Indy 500 party. This was well worth the trip!”

While the Dodge Demon was a real attention getter, the highlight of the show for me was the 2018 Porsche GT3 that was on display from Porsche Barrington. This particular GT3 was painted in one of Porsche’s most special colors, Acid Green. If you ever want to know how to make Lamborghini colors to look mundane by comparison, show up in an Acid Green Porsche. This GT3 was also very special because it was a brand-new 991.2 model. The refreshed 2018 is the first GT3 in years to feature an optional manual transmission, the choice of any real driving enthusiast. 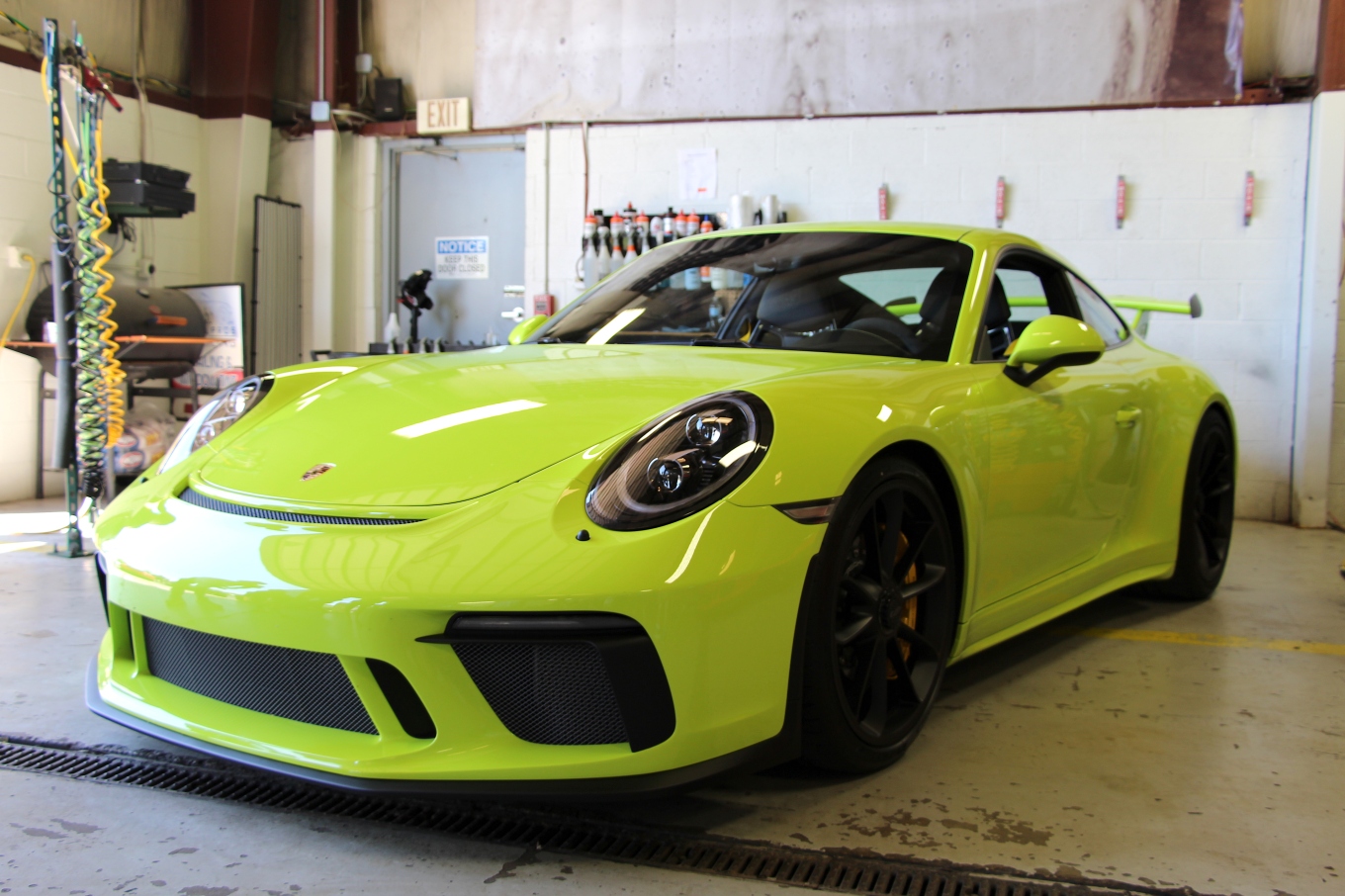 Many consider the Porsche GT3 to be the purest expression of driving enjoyment. The formula is simple; light weight, extremely stiff chassis, rear-engine layout. The crown jewel for the GT3 is its motorsport inspired engine, a naturally-aspirated 4.0 liter six-cylinder good for 500 horsepower. The visceral experience is amplified by a redline of 9000 rpm with peak horsepower near the top.

Back in 2016 I had an opportunity to get behind the wheel of a then new GT3 at the Autobahn Country Club in Joliet, IL. Up until that point, my opinion of the car was based on the near mythical accolades surrounding the GT3. I got behind the wheel of the Porsche right after climbing out of an Audi R8 and was astounded by the precision of the track weapon from Stuttgart. Revving the engine all the way out to 9000 rpm rewarded me with a symphonic howl unlike any other car.

Although my time with the GT3 was brief, it left a lasting impression on me. One factor could have made my driving experience even more memorable; the now available six speed manual transmission. This isn’t to say that the seven-speed Porsche PDK duel clutch transmission isn’t a good choice. In fact, it’s the industry standard. But, there’s something about shifting your own gears that really connects driver and car. It will be interesting to see sales figures of manual versus automatic GT3’s, especially when new cars with standard transmissions are on the red list of threatened species.

This is why in my opinion the 2018 GT3 was the highlight of the open house. Equipped with a $11,000 Acid Green paintjob, carbon fiber bucket seats and a manual transmission that particular example outshined the other cars on display and even the several other Porsche GT3’s in attendance.

The 2018 Chicago Auto Pros open house was a unique show thanks to the hospitality from the event organizers and the variety of vehicles in attendance. With the success of the second show, it’s certain next year will be even better.